What is Tae Kwon-Do?

Literally translated from Korean "TAE" means to kick or smash with the foot, "KWON" to punch or strike with the hand "DO" is the art or way, to the translation to English would be “the art of kicking and punching"

Join us
The Weston club was founded on 1st Feb 1975 by a RAF bandsman who was stationed in RAF Locking, the classes started on the campus and consisted mainly of the trainee radio and radar technicians who lived and worked there.
The club then moved on to Bournville junior school and remained there until Hutton Moor opened in 1999.
As a form of physical exercise Taekwondo has a profound effect on all everyone, no matter what your current state of fitness it will improve. Taekwondo makes no assumptions on people's general level of fitness, through a stepped series of movements and exercised you feel the benefits of regular training increasing your flexibility and cardiovascular performance.

·     As a martial art Taekwondo involves attacking opponents with bare hands and feet. The one distinguishing factor that Tae Kwon Do has from other martial arts is its powerful and diverse foot techniques, which make this martial art one of the world's most powerful sports. Even though Taekwondo involves no use of weapons, it has the ability to knock down an opponent in one single blow. But Taekwondo emphasises mastering defence techniques, which come from the Taekwondo thinking of respecting peace and justice. Taekwondo teaches practitioners to practice the attitude of self-discipline to defend oneself and never attack or defeat others.

·      As an educational tool Taekwondo not only improve your physical wellbeing, but your mental state as well. Through Taekwondo a student practices the art of self-perfection and understands the techniques in pursuit of the virtue of human life. In the class the student not only develops their body, but the mind as well. With the physical exercise of stretching, strengthening, drilling, and sparring, the Taekwondo student learns respect for their instructor's, senior students, classmates, and themselves. A proficient student will try and live life by the 5 tenants of Taekwondo   The development and self-fulfilment and of achieving what you are capable of is in the central theme in the training of Taekwondo.

Patters are a set sequence of movements against one or more imaginary opponents, each of the 24 patterns has a defined meaning and introduced new movements to the student, patters offer the best was to judge one's capabilities as the is no one else to compete with, only oneself. The patterns start with simple movements and become increasingly more taxing on the body and mind to complete.

This is the free form of sparring in which student's practice the defensive and offensive moments learned in class. The emphasis is always on control and sportsmanship. All students are fully kited out in protective equipment to minimise the risk of injury, not to allow contact to teach other.

Tae Kwon-Do competition is divided into 3 separate disciplines, sparring, patterns & destruction. The tournaments are run at local, national & international level, the events are open to all students from yellow belt onwards. The TAGB prides its self on the quality of the management at tournaments and the world beating standard of the students in the association.

Along with most other martial art there is a series of grading representing rank. Each student begins training as a white belt and is promoted to yellow, green, blue, red, and then finally black belt. These ranks under black belt are called Kup and range from 9th Kup (lowest) to 1st Kup (highest). In contrast, black belt is divided into 1st Dan (degree) to 9th Dan (from lowest to highest). It will take a diligent student from 3 1/2 to 5 years to attain 1st Dan Black Belt.

In the training school, the Dojang, there is no age, sex, or racial barriers; everyone begins their training with a white belt. The instructor allows each practitioner to progress at their own rate in accordance with their ability. During this learning, the student can expect to develop strength, stamina, quickness, flexibility, co-ordination, and balance. But to fully master the sport, one must also develop the important mental characteristics: patience, humility, self-control, perseverance, concentration, and respect. It takes years of studying and practising to reach the black belt level. As students develop skill, they are awarded coloured belts, which signify class rank. 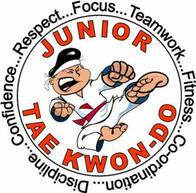