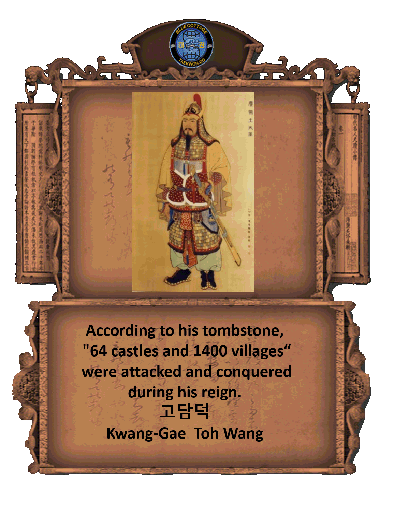 KWANG-GAE is named after the famous Kwang-Gae-Toh-Wang,
the 19th King of the Koguryo Dynasty, who regained all the lost
territories including the greater part of Manchuria. The diagram
represents the expansion and recovery of lost territory. The 39
movements refer to the first two figures of 391 A. D, the year he
came to the throne.

King Kwang-Gae-Toh-Wang (meaning "broad expander of territory") was born in 374 AD and ascended to the throne
in 391, at the age of just seventeen, to become the 19th king of the Koguryo Dynasty. He ruled over Koguryo at the
time in Korea's history known as The Three Kingdoms, so called because during this time the Korean peninsula was
constantly being fought over by the three Koguryo, Silla and Paekche dynasties. He is sometimes referred to as
Great King Yeongnak, after the era name selected by him.

He expanded Koguryo’s territories far into the Korean peninsula by advancing southward at the expense of the
Paekche dynasty to occupy the north of the Han River, and occupied Manchurian territory to the east of Liaohe. On
his death in 413, at just 39 years of age, Koguryo ruled everything between the Sungari and Han Rivers. This gave it
control over two thirds of what is now modern Korea as well as a large part of Manchuria. In addition, the chieftains
of Silla submitted to the northern kingdom's authority in 399 to receive protection from Japanese raids. Only
Paekche continued to resist Koguryo domination during this period, thereby preventing what would have been the
first recognised unification of the Korean peninsula.
During his reign, King Kwang-Gae conquered 65 walled cities and some 1,400 villages, in addition to aiding Silla
when it was attacked by the Japanese. In 392 he built nine Buddhist temples in Pyongyang. His accomplishments
are recorded on a monument which was erected in 414 in southern Manchuria.
The first movement in Kwang Gae Tul is stated as :
Bring the left foot to the right foot, forming a close ready stance B toward D, bringing both hands in a circular
motion.
Some speculate that it might signify the expansion and recovery of lost territory as per the pattern meaning.
An interesting story about this movement.
It is said to signify the warrior-king standing amidst his army on either side of him, facing an enemy. Surveying the
weather conditions, position of the sun etc to determine if they are favourable to his army. He then breaks his
hands/arms apart in a circular motion signaling his army to attack from those flanks.
The South Korean Navy has a frigate:
The 3,900 ton King Kwang-Gae-to-dae-wang was commissioned last year, and is the first of the KDX-1 class FFGs. It
is fitted with 8 Block 1C Harpoons, and RIM-7P Sea Sparrow in Mk 48 VLS.
Around the end of 3rd century BC in China, Chin got perished and Han arose. In the chaos during the change, a man
Wui-Man, with a group of his people, came over to King Jun, who let him defend the western border of Ko-Cho-Sun.
However, Wui-Man later subverted King Jun and made himself a King. King Wu-Guo, a grandson of Wui-Man, cut off
direct trade between Han and other countries on the outskirts of Ko-Cho-Sun and made big geographical
advantages by transit trade between the two. Han got upset for this and attacked Ko-Cho-Sun. After one year lasted
war, Ko-Cho-Sun got perished by Han. However, King Mi-Chun and Kwang-Gae-To, of Koguryo of the Era of Three
Kingdoms recovered the lost territories

King Tamdok (c. 374 to 413 A.D.) was posthumously given the title Kwang Gae, which means ‘broad enlarger of territory’.

By advancing north and south, Kwang Gae overtook Paekche land to the north of the Han River; he also expanded into much of Manchuria and parts of Inner Mongolia. He eventually ruled two thirds of the Korean peninsular.

In 392 A.D. King Kwang-Gae is recorded to have had nine Buddhist temples built.

He did not quite succeed in unifying Korea, despite aiding Silla when they were attacked by the Japanese pirates.

Kwang Gae’s son who also went on to expand his territory had a 24 foot monument erected in 414 A.D. next to his father’s tomb to record his achievements.
The monument had 18000 Chinese characters carved into it, which record his conquests of 64 walled cities (sometimes referred to as castles) and 1,400 villages.