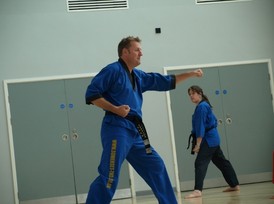 Simon Lambert 7th Dan World Master, The principal instructor, takes the classes in this club. He started his training in 1983 under Mr Keith Hague in Weston and then with Grand Master Dew at the Bristol Academy.

Having had the opportunity to train with some of the country’s top exponents of Tae Kwon-Do, he has formed classes that are fun and informative having something to offer every student.

He gained his first grades with Master Rhee Ki Ha 9th Dan Then gained his first, second and third Dan grades with Grand Master Hee Ill Cho 9th Dan, his fourth and fifth Dans were taken in front of the Grand Masters of the TAGB. Master Lambert was awarded his 7th Dan World Master status in 2021 for services and promotion of the art as well as being a senior black belt instructor to the South West of England.

The club exists with the continued support from all the students and especially the black belts; without their support the club would not be as successful as it is today.

The club has taken students of all ages from 7 through to pensioners. Although the club has had success at regional and national level in tournaments, we pride ourselves in promoting confident active fighting/sparring which is more transferable to real situations rather than just to the competition area.